What is whole-body math learning? How can we be doing math if it’s not written down? What are our expectations for student work and learning math out of their seats?

My focus in Math on the Move is on how we can harness our students’ inherent “body knowledge” to help them develop new understanding and facility with mathematical ideas that often seem remote and impenetrable as presented in their textbooks. This is not to say that math is this way, but for many people, myself included, the symbolic side of math creates a barrier, at least initially, to understanding. This is why approaches like Numberless Word Problems  (“They just add all the numbers. It doesn’t matter what the problem says.”) and Notice and Wonder  were created: to help kids make sense of math.

The phrase “body knowledge” was coined by the late Seymour Papert, a protégée of Jean Piaget. In the 1980s Papert’s work at MIT focused on developing “objects to think with,” including the Logo computer programming system for children. Here are a few images of children engaged in self-initiated, body-based exploration of a math idea as they investigate the spatial aspects and physical structure of their environment. 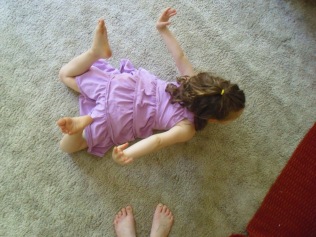 Papert’s intention was to harness a child’s own lived experiences and natural, self-intiated explorations in the world as a way to investigate more formal mathematics via the programming of a little metal object called the “Turtle.” Much of what we do in Math in Your Feet is similar to what children do with the LOGO turtle – working independently or in teams within a specific system/constraint, investigating and creating units of commands or patterns in a spatial and geometric language and, along the way, fine tuning our intentions and results.

Similar to Papert’s work, Math on the Move is about math, but it is also about the nature of learning by actually making something and the need to develop strong pedagogy for what might be seen as a non-traditional approach. For me this means a meaningful  interdisciplinary, movement-based approach beyond the preschool years. In the first chapter I provide an overview of what meaningful whole-body math learning looks like in my own and others’ moving math classrooms. I clarify the body’s role as a thinking tool and its use within a purposeful making and learning context. I also provide a conceptual framework and pedagogical base for any educator wishing to do similar work with his/her own students at body- or moving-scale.

Because our encounters with math have been, for the most part, visual and on the page, a whole-body approach to learning math may feel foreign to both teachers and students. To quell the qualms of others who may want to try this approach in their own classroom I have spent years working to define the pedagogical elements that must be present so children can think deeply and engage in mathematical sense making with their whole bodies.  The criteria (which are explained in more detail in the book) include:

One thought on “A Framework for Whole-Body Math Teaching & Learning”