I am so excited to share the work of Lisa Ormsbee at Fairhill School in Dallas, Texas  who has spent the past two weeks running a math and movement summer enrichment camp using resources from Math on the Move, the Move with Math in May lesson plans, a rhythm-based exercise program called Drumfit, and a lot of other great ideas she pulled together to meet the needs of her students through rhythm and movement. She has ten students with most of the students “learning different” (e.g. dyslexia, dysgraphia, ADHD, mild autism, and selective mutism)  not all of them fans of math, what she described as a “general math reluctance.” 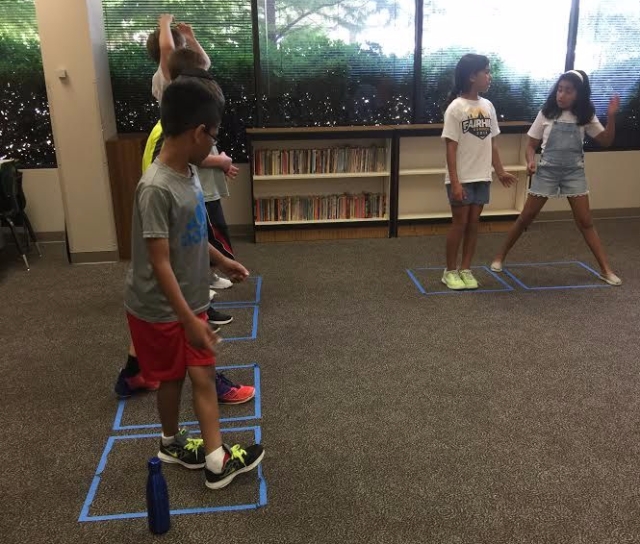 I was thrilled to get her wonderful email updates on the first and second week of programming which showed just how much of an impact a #movingmath approach can have for all learners. I especially love the progression Lisa created to gently lead reluctant movers (and math-ers) into what has become enthusiastic engagement! Here’s some of what Lisa shared with me:

Monday:  I did a couple of ice breaker activities which involved moving around and were non-threatening (meaning no one HAD to talk in front of the  group).  I started by challenging them to put THEMSELVES into patterns during this warm up time – it was totally spontaneous but it was fun for them. We also got oriented to our class space.  I had removed all the desks and chairs and had the [Math in Your Feet] squares taped on the floor.  They had to adjust to the idea that we weren’t going to sit in desks. I also introduced Drumfit on this day and used that activity time to introduce “follow me” patterns with the drumming rhythms. These kids are fairly reluctant to move around and have pretty low physical literacy and body confidence so I wanted to be sure to take the introduction of the program slowly.  They did extremely well with the movement during the icebreakers!  The drumming is growing on them but took several days for them to feel confident and, some still do not, but I’m not pushing them in that area as it’s a “fun” time. It’s such a good fit with patterns and using your body to make them though!

Tuesday: We did the pattern game sitting in a circle that you outline in one of your lessons [Clap Hands: A Body-Rhythm Pattern Game].  This was HARD for some of them!  They were all engaged in it though.  We could certainly do this again!  Then we went to our gym space and used the ladders to prove the center [Proving Center lesson] in teams and also to create patterns as a team using bodies and any other items they wanted to use. They were told to be as creative as they wanted with their repeatable pattern. We discussed symmetry here too.  I used my purple circle discs to have them create a game using their ladders also. The game had to have some “math” in it. It was so very, very interesting to watch them do all of this!! We discussed a lot after that and talked about what they had done and how they had thought of their games and patterns.

time Lisa introduced the first step in the  Math in Your Feet “pattern/partner/dance process.”  Lisa wrote:

It was slow and I didn’t hurry them.  It took a while to orient them to the squares, talk about sameness (congruence), and review the movement variables. We also took a LONG time talking about the turns. That’s all we got done but I told them we’d be making a pattern with our partner the next day and we’d be concerned with precision and sameness.

On Friday they started working with their partners on creating their 4-beat patterns.

The kids were ALL so engaged in this activity!  I couldn’t believe it.  They had some trouble with cooperation and with identifying sameness. It was extremely hard for a couple of students but because they were working with a partner they were more interested in “sticking in there” where it was uncomfortable until they got it right!  AWESOME!!  I felt like it was a successful day and I can’t wait to do more.

Next week, I want to have them write a little bit about their patterns and make a drawing etc. like you do in the book.  I also want to let them do this part again then work on combining and transforming.  When we get to the mirroring piece we will have to go pretty slowly I’m guessing.

During the second week of summer school Lisa did the mirroring/reflection lessons and was also able to extend and connect the physical work by having them having them map their patterns and then read/decode each other’s pattern maps.

Once I added music to the activity they had a blast!  I feel we were all inspired by the Math in Your Feet program to be open to new ways to learn through movement. I was so caught up in our activities I didn’t get any pictures!

But she did eventually get some videos! Here are a couple showing the children’s awesome physical thinking around reflection. One person is keeping their rights and lefts the same as they originally designed the pattern, and the other person is dancing the pattern with opposite lefts and rights. And this is all on top of some tricky rotations. A mighty feat!

Lisa says: I hope [this account] helps others dive into the program because my kids really engaged with it and I am 100% sure that they would not have been so engaged had I chosen a more traditional program for the summer enrichment. I really hope this will help them with their understanding of math and also with their movement confidence and honestly, their joy of moving! I’ll be the P.E. teacher here next year – although I must say this might actually make me a fan of math too. Yay!

Thank you, Lisa, for sharing your work with us!

Malke Rosenfeld is a dance teaching artist, author, editor, math explorer, and presenter whose interests focus on the learning that happens at the intersection of math and the moving body. She delights in creating rich environments in which children and adults can explore, make, play, and talk math based on their own questions and inclinations.

2 thoughts on “Notes from a #movingmath Summer Classroom”

Follow Math on the Move on WordPress.com
Join 5,073 other followers