A few months ago I was asked by a school district to develop a pre-workshop workshop (yes, you heard right!) for 100 (!) 4th and 5th graders from six different elementary schools. I was brought in to design a pre-contest project that would focus on the process of collaborating in a making setting. This, in turn, would set the scene for an afternoon of collaborative Rube Goldberg Machine design and testing.

I knew exactly what I would do! For the most part, math activities and building projects are either on the page or explored with the hands. There’s nothing wrong with this, but I knew from my work developing and fine tuning Math in Your Feet that a scaled up, whole-body activity provides some mighty opportunies for talking, negotiating, learning, and working together.

We divided the kids, who, for the most part, were meeting their group members for the first time, into 20 groups of five. Each of the 10 adult chaperones were tasked with keeping tabs on two groups and providing ocassional check-ins. Once the kids were organized, I gave them a challenge:

Using the newspaper rolls and blue tape, work together with your group to build a structure that can 1) stand up independently of human support and 2)  be big enough to hold at least one or two group members, either sitting or standing inside the structure.

During the workshop I scheduled three formal moments for the groups to pause their activity and reflect with their teammates about aspects of their communication and the building process. The lesson plan has all the details.

As part of my planning I decided that if we were going to do a project with this many kids I really wanted to have a detailed understanding of what they thought about the process. I knew that the workshop itself would go well enough because I’ve done this before at a smaller scale. However, I wanted their final activity of the build to be focused on personal written reflection. I wanted to gauge the overall dynamics and, hopefully, get some “data” on what nine and ten year olds might take away from a workshop that is intentionally focused on collaborative learning and making at the same time.

A NOTE ON CHANGING SCALE
Kids are used to building with their hands. Legos, Kinex, marble mazes, etc. provide ample opportunity for literally building spatial reasoning which is the foundation of mathematical thinking. The newspaper rolls are one large sheet of newspaper rolled on the diagonal and can create a potent creative constraint requiring inginuity and collaboration. Their reflections, below, will give you a good sense of this.

What did you notice about the building process? [3 Sections]

Would things have been easier or harder if you hadn’t been required to collaborate in a group?

What was your role in the building process? Would you have liked a different role? Did you feel heard by the other group members? 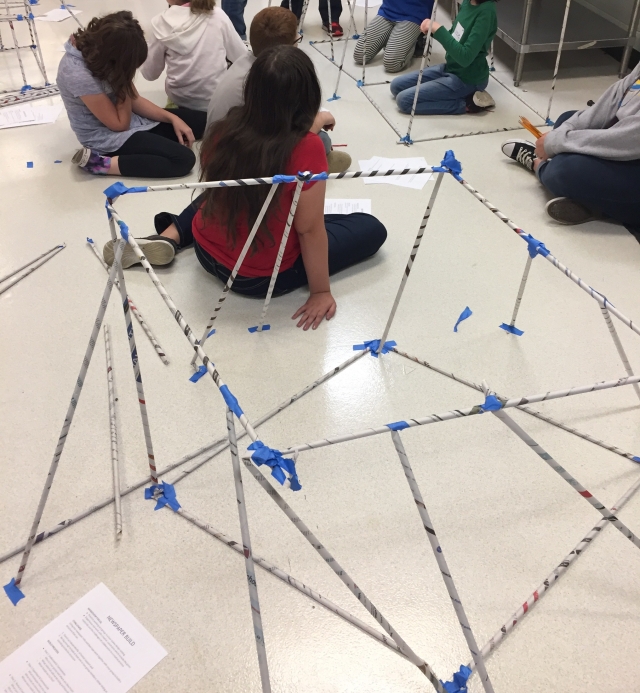 I’m thrilled about how seriously the students took the final written reflection because it provided great insights into what was happening inside each group. As I anticipated, some groups worked well, some didn’t; some kids felt heard, some didn’t. Some kids like working alone and others like working in a group. What’s clear to me, however, is that collaboration is pretty much a skill that needs to be intentionally developed.

On thing I wonder is how this activity would have played out if it had been a group of kids who actually knew each other. If you’re interested here is the full lesson plan.  Let me know how it goes!

Malke Rosenfeld is a dance teaching artist, author, editor, math explorer, and presenter whose interests focus on the learning that happens at the intersection of math and the moving body. She also delights in creating rich environments for math art making in which children and adults can explore, make, play, and talk math based on their own questions and inclinations.

One thought on “Inside the Whole-Body Newspaper Build Project”

Follow Math on the Move on WordPress.com
Join 5,073 other subscribers