Yesterday I was at the library for my now monthly #makingmath sessions for kids and their parents. The ages for this event seem to trend 8 and under, probably because parents with young children are often looking for something to do on Sunday afternoons. Our youngest participant yesterday was two and a little more, and this little story is about her.

I’ve written previously on this blog about what it looks like when children think and learn mathematically with their bodies. Yesterday my new friend was there with her mom and her brother. Her brother made this delightful “Dr. Seuss house with smoke coming out of the chimney” while she made a crown and earrings for herself out of the same materials. 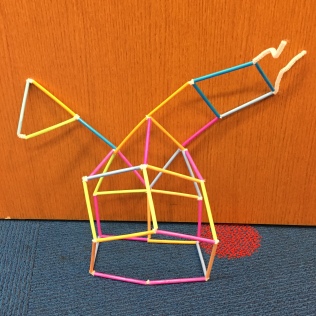 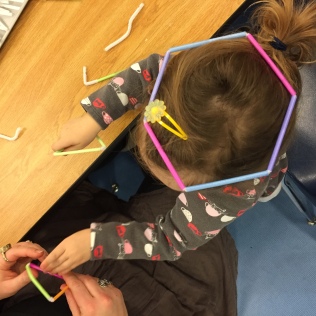 Another activity we had going on was playing around with these cool hexagon building blocks that I found in a big box dollar bin a couple summers ago.  A boy made an object that was just begging to be spun…

…after which my little two year old friend started rotating around in one spot exclaiming to me: “I’m spinning!”

This is just one more example of how children think and learn with their bodies. She was entranced by the toy and it’s gorgeousness.  She spent a quick moment spinning exactly like the top and then went back to making earrings for her mother.

The body is where learning originates. Children use their bodies to show us every day what they know and think and wonder. This non-verbal, physical manifestation of cognition is present every day in some way. I invite you to put on your #movingmath glasses and, when you notice something tell us about it! Here’s a few places where you can share:

I can’t wait to hear about (or see) what you notice!

Malke Rosenfeld is a dance teaching artist, author, editor, math explorer, and presenter whose interests focus on the learning that happens at the intersection of math and the moving body. She delights in creating rich environments in which children and adults can explore, make, play, and talk math based on their own questions and inclinations. Join Malke and other educators on Facebook as we build a growing community of practice around whole-body math learning.

2 thoughts on “A Quick Example of Body-Based Cognition: Spinning”