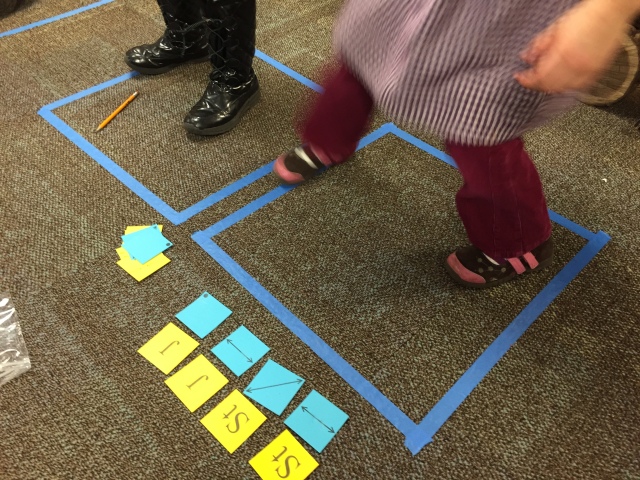 There’s a lot to think about when creating an environment for meaningful whole body math learning. Luckily, not only is the new book  filled with a wide range of information for implementing this approach in your classroom but we also have our Facebook Book Group as a space for conversations and support.

Recently a question came in on the FB group from a math teacher in the UK.  Jason Gottfried has been working on ideas for adding whole body movement into his teaching. His question and our resulting (slightly edited) conversation illustrate some of the important thinking that goes into creating and assessing activities where children’s whole bodies are engaged in making sense of math ideas.

JASON:
Hi all, I’m planning to experiment with coding and Math in Your Feet type choreography this Sunday. I will get participants to sequence dance “instructions” fairly loosely within beats in a bar and see if they or others can follow the “program”. I should be able to introduce loops and possibly conditional structures also. I’m thinking that instructions can be on cards and laid on a grid representing 4 beat bars. Any ideas about how to make this work out there? Love to hear about any activities like this that you may have done or heard about. Thanks.

When thinking about programming in particular, and the body’s role in math learning in general, Seymour Papert’s book Mindstorms comes immediately to mind. In the book he reminds us that children have powerful ideas; his work with the LOGO turtle showed that kids will learn and thrive in an environment of exploration. It’s likely your participants will be able to follow along, but it might be way more fun for them, given some basic ideas, to create their own programs for others to “de-bug”.

JASON:
Thanks for the ideas. The idea of debugging a program is a few levels above what I had thought of. Amazing! I’ve currently produced a row of 4 cells to hold the “program” and I have instructions which are pictures of feet positions that children have to get their feet into for that beat. At the festival I’ll be at I usually get children aged 5 – 10 come and engage; I’m hoping I can get them to try to dance one of my programs and then try to arrange one themselves using cards with feet positions already on them and blank cards if needed. I don’t think I’m using actual footwork and I am not sure (but intrigued by the idea of) how to perform operations on the footwork. It’s totally experimental for me. I’ll definitely let you know how it went. Thanks again for the support.

MALKE:
So a simple way to create more exploration/agency would be to give them a program with the cards and then ask them if they want to try making a different “program” using the same cards. Which program “feels” better to execute? Is there anything they wish they could do that they don’t have a card/command for? Maybe have blank cards handy so they can create their own commands? That would be more than enough for a festival — a simple prompt/provocation and a chance to play around with making it different. Can’t wait to hear/see more!

JASON:
That’s it! Linking it to how it feels is great! That feels like the bit I was missing. Thank you. I’ll let you know how it went. Attached a picture of my son playing with the instructions. He had a couple of tries then went for the most complicated dance possible. Another angle I suppose.

MALKE:
So, to add some complexity you might ask “How are you going to get into the new position? What movement could you use to get there in one beat?” That’s totally what we do in Math in Your Feet.  I can’t wait for the book to come out!! Lol

JASON:
You can’t wait! Imagine how it is for us. Every dip in seems to shake the fundamentals of teaching and learning and provide the ‘missing’ links between cognitive, affective and psychomotor. All brilliant stuff!

JASON [a week later]:
I didn’t get around to doing much with the dance programming last week. It was really useful to initiate the ideas but I realised I was not experienced enough to deal with it without more preparation. Only had under 7s turn up. It was a great session though. I had a few people suggest moves and even try them out with me. I felt (as you suggested) that they really enjoyed having a creative impact on the dance. It was really cool. I’m exploring the idea more in my regular maths circle this term.

Final thoughts:
We are just getting started on this grand adventure! I hope you will join this exciting journey over on Facebook or here on the blog. There’s a lot we can begin explore and discover about a whole body approach to math learning as we wait for the book to be released.

Malke Rosenfeld delights in creating rich environments in which children and their adults can explore, make, play, and talk math based on their own questions and inclinations. Her upcoming book, Math on the Move: Engaging Students in Whole Body Learning, will be published by Heinemann in Fall 2016.

One thought on “Conversation: Getting started with #movingmath”

Follow Math on the Move on WordPress.com
Join 5,071 other followers